When the alarm went off before sunrise I did not want to budge. Our Prague Air BnB bed was a little too firm for my liking, but I could have slept contently for a couple more hours. Even more reluctant to move was Dave, who is simply not a morning person. Phillie did not take much coaxing, but then she could fall back asleep easily on our walk. 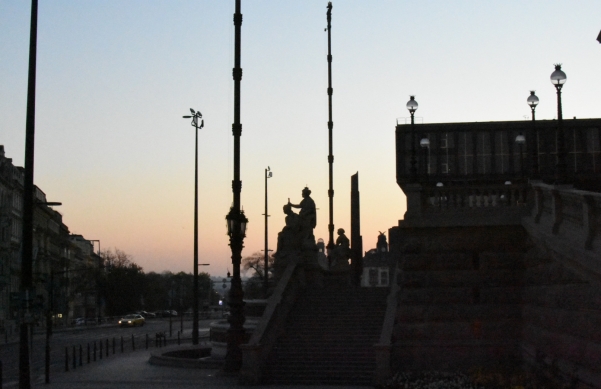 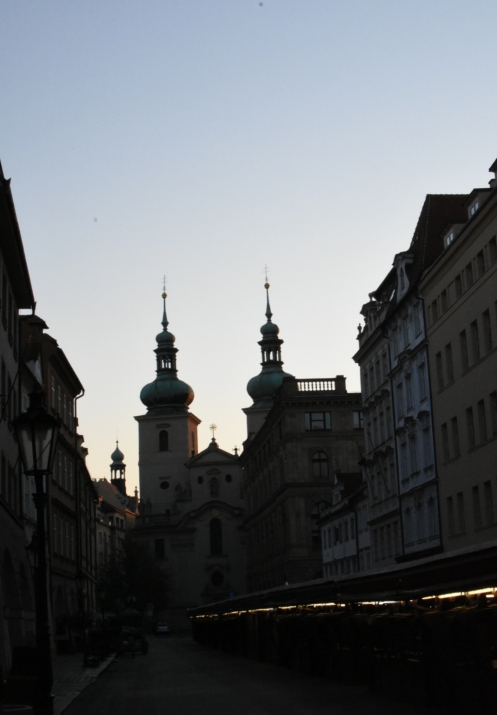 We were trying to catch the sunrise at Charles Bridge during our trip to Prague last spring. It was immediately clear that we would not make sunrise, but  we also instantly felt the early walk was worth it. They city was so beautiful. It was a chilly morning, and I wished I had my coat and some coffee, but despite the cold I felt so happy to be there, walking through its magnificence. Prague is an enchanting city at all hours, but even more so in the early light. I felt myself smiling in awe turn after turn. It seemed more majestic without the crowds that the later day brings. There were not a ton of people out. Many we passed seemed to be nearing the end of their night rather than starting a new day.

The Charles Bridge was wonderful for its statues, and for the view it offers of the city and Prauge Castle. Several people were there taking photos, but nothing like it would be later in the day. We enjoyed our time before continuing our walk.

From the bridge we walked to the Naplavka Farmers Market, which ran along the Vltrava River. My sister, Holly, and Jacob my brother-in-law would meet us there. We arrived minutes before the market officially opened. Already people were shopping, and short lines were forming at coffee vendors. We settled on the first coffee stall we found, needing the warmth as much as the caffeine. To our surprise they served our coffee to us in real glasses. Not knowing if we should walk away with them, we sat down at a table right next to it. I sent Dave to scope out pastries. He came back with two choices and we dove in. Meanwhile we quickly observed that the glasses were being returned for deposits. We finished our coffees and did the same.

One of my favorite farmers market rituals is walking the market to take it all in. It was April, and while there were a few produce stands, much of the market seemed to be prepared foods, and we were not the only ones there for our breakfast. There were cheesemongers, butchers, and countless bakeries with beautiful breads and pastries. One of the next things I purchased were biscuits called pagace. They were so flaky and flavorful. One had sauerkraut mixed into the dough. The other had spinach and pine nuts.

When Holly and Jacob arrived Holly immediately said to me, “You look so happy.” I was grinning from ear to ear like a kid in a candy shop. We got more coffee at a different stall, this time knowing we could haul our coffees along with us while we explored. She soon found someone selling calzones and bread smothered with pesto, which caught her eye. She gave me a bite of the bread and pesto and it was so delicious and fragrant. Pesto can often be skimpy or low-quality and over-hyped, but this pesto was slathered on thick, and so flavorful and 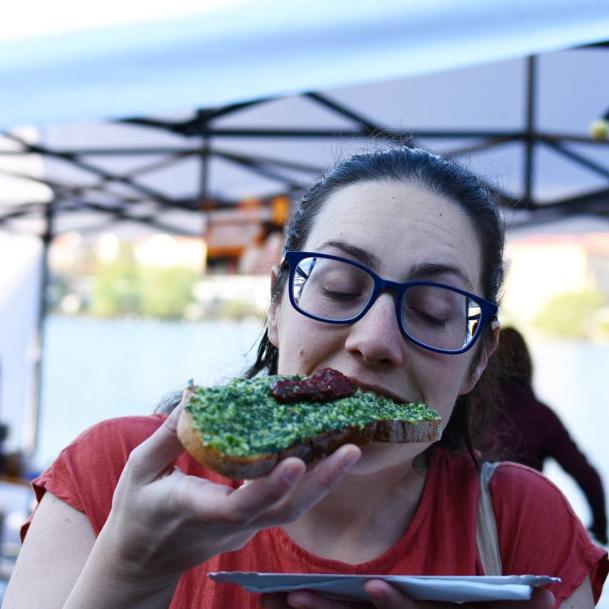 bright. Served on great bread it was a beautiful thing. I then pulled them over to the pagace, which I knew they had to try. My sister is far more outgoing than I am, and quickly learned that they were made with lard and traditionally with cracklings. We also tried a spinach kolache, and bought more pastries for later. (One of which was a honey cake, which was perfect. I’ll never forget it.) 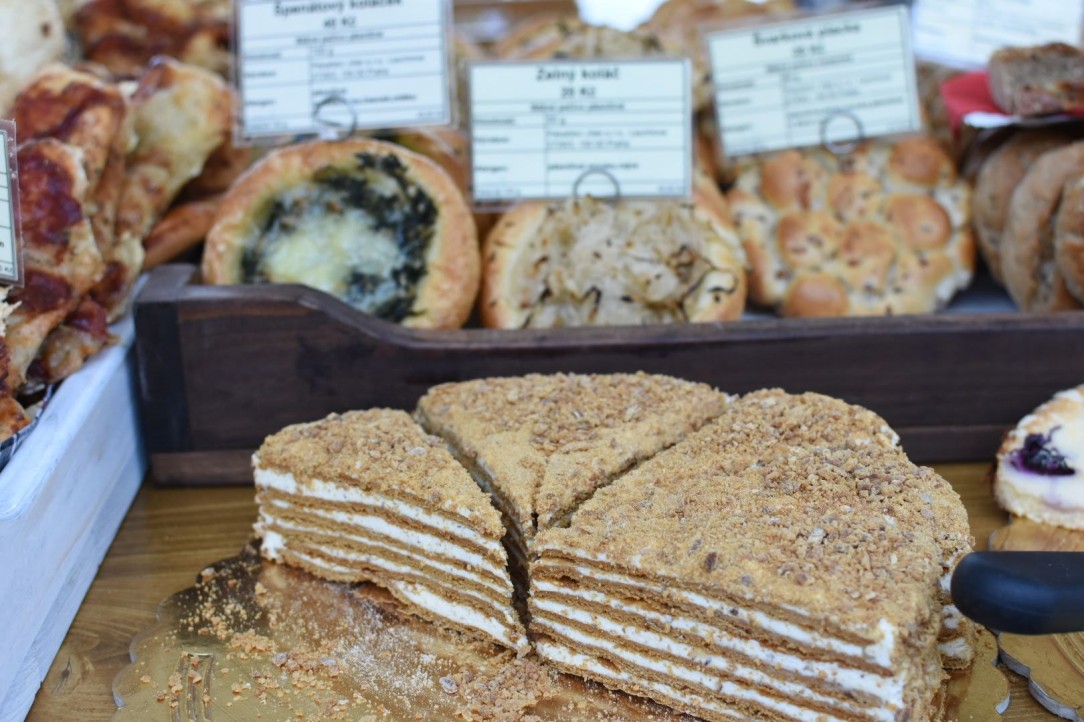 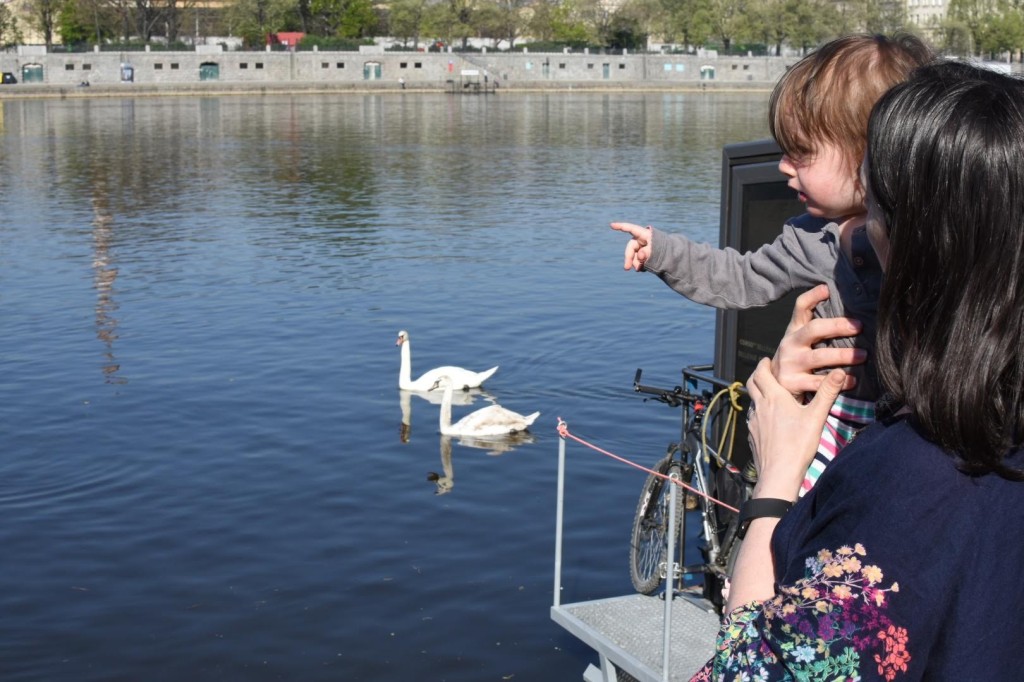 Between food stops, we just enjoyed the scenery and took in our surroundings. Swans swam by, which Phillie was delighted by. She nursed a bit when she wasn’t watching the swans or eating. There might have been a third coffee stop. Dave and Jacob got Czech beers which were also served in legit glasses that came with a deposit. I bought a bowl red stew, which came from a giant pot simmering next to paprika peppers. The stew had a mix of pork sausage, cabbage and potatoes. It was served with a piece of bread. It was so warming, and delicately spicy. 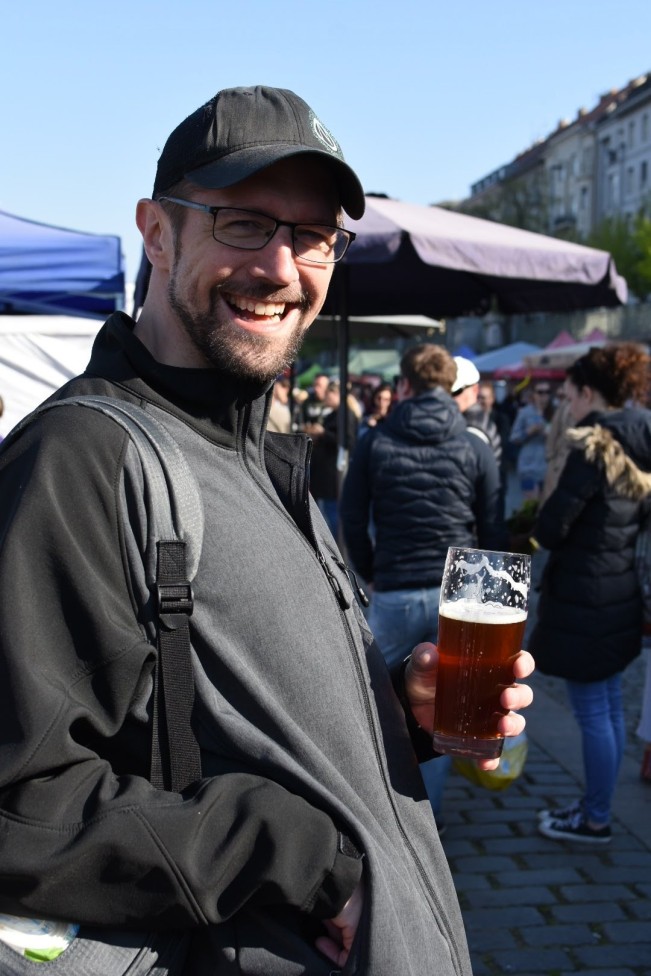 Shortly after, it was time to move on to explore more of Prague. On our way out we bought some cheese and bread to take back to our Air BnB. Our bellies were full, and our hearts happy. I will never forget that delicious morning. I hope to eat my way through more many more markets on my travels.

I would like to thank the knowledgeable people at Taste of Prague, whose blog convinced me to visit the Naplavka Farmer’s Market, and to get up early to see the Charles Bridge. Definitely check out their website if you’re planning a Prague visit soon!

View all posts by Erin Kowal

4 comments on “An Early Prague Morning”